"Nobody gets out of here alive"...

Success is not forever.  And, Failure is not fatal...

The Cost of Dreams

It don't cost you a Nickle to Dream...

If Your Job is So Great?

Live and Learn.  Die and Forget it...

Lay down & die, or Shake it off 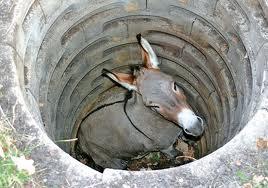 One day a farmer's donkey fell down into a well. The animal cried piteously for hours as the farmer tried to figure out what to do. Finally, he decided the animal was old, and the well needed to be covered up anyway; it just wasn't worth it to retrieve the donkey.

He invited all his neighbors to come over and help him. They all grabbed a shovel and began to shovel dirt into the well. At first, the donkey realized what was happening and cried horribly. Then, to everyone's amazement he quieted down.

A few shovel loads later, the farmer finally looked down the well. He was astonished at what he saw. With each shovel of dirt that hit his back, the donkey was doing something amazing. He would shake it off and take a step up.

As the farmer's neighbors continued to shovel dirt on top of the animal, he would shake it off and take a step up. Pretty soon, everyone was amazed as the donkey stepped up over the edge of the well and happily trotted off!

Remember the five simple rules to be happy:

1. Free your heart from hatred - Forgive.

2. Free your mind from worries - Most never happens.

3. Live simply and appreciate what you have.

5. Expect less from people but more from God.

You have two choices... smile and close this page,

or pass this along to someone else to share the lesson .

God bless us all!

It's worth a try

Life is NOT fair, but people can be reasonable.  Insist on it.

On how to cope with daily life

You play the cards you’re given and you play the best hand possible.  Don't look back.

Do it now - this isn't a Dress Rehearsal.

Sherry Anderson:   ‎"You can conquer almost any fear if you will only make up your mind to do so. For remember, fear doesn't exist anywhere except in the mind."  -   Dale Carnegie